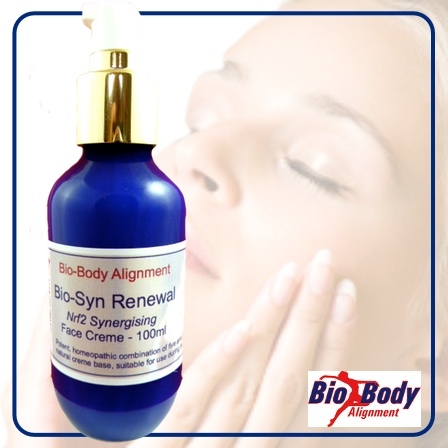 We've perfected a wonderful anti-aging creme, with the benefits of 5 potent anti-aging and anti-inflammatory herbs. Organic herbs sourced from throughout the world to produce a unique formulation proven to slow the ageing of cells due to damage by free radicals. Suitable for use while on any of the Bio Body Weight Loss programs, plus delightful to use in its own right. (NB* We now use a amber glass bottle and our labelling has changed, but our formula hasn't!)
Price:
NZ$ 52.84 including GST
NZ$ 45.95 excluding GST
Out Of Stock
Rating:
☆ ☆ ☆ ☆ ☆

Homeopathic in an all-natural, oil-free base:

Consisting of the homeopathic signatures of Turmeric, Ashwagandha, Milk Thistle, Bacopa and Green Tea, our Bio-Syn Body Renewal Face Creme provides energetic resonance with the Nrf2 gene, which has been identified as the "youth gene". Damage and ageing are caused through premature free radical damage to cells. The unique combination of the 5 herbs increases the body's ability to buffer this damage by a staggering 60%, and when applied topically as a daily moisturiser further assists with balancing skin conditions and slowing aging.

To enjoy the full benefits possible, it is recommended that you use our the Bio-Syn Body Renewal Face Creme for a minimum 6 weeks. It is ideal for use on any of the Bio Body Weight Loss HCG Diet Success programs, and its continued use is also beneficial, even as a base used with your existing beauty products.

The milk thistle is a tall, flowering plant with spiny stems and toothed, thorny leaves. Native to the Mediterranean, this plant can now be found throughout the world. It has been used for hundreds of years as a liver protectant and to support liver function and relieve digestive disturbances. Studies have been conducted since the 1970s on the plant's medicinal properties, and increasing research continues today on milk thistle's physiological effects and therapeutic properties.

Bacopa is native to the marshy areas of India and can now be found throughout the tropic and subtropic areas of the world. It can grow at elevations from sea level to 4,400 feet. Stems of this 4-inch-tall, 2-foot-wide plant are covered in tiny five-petal flowers. Recent research has focused on the plant's effects on memory, learning and concentration. In addition, there is research on the plant's ability to remedy anxiety, epilepsy, bronchitis and asthma, irritable bowel syndrome, and gastric ulcers. Bacopa may also protect against free radical damage in cardiovascular disease and certain types of cancer.

Ashwagandha grows in the drier regions of India, and though it has been used for centuries in traditional Indian medicine, it has gained popularity in the Western world. Traditionally, this herb was used a tonic to raise energy levels and improve general health and longevity. More recently, ashwagandha has generated interest in the study of its anti-inflammatory, antitumor, antistress and antioxidant properties. Studies have also focused on its effects on the endocrine and nervous systems.

Green tea has played a central role in Asian and Middle Eastern Cultures for 4000 years. Although a number of varieties of this tea have been created, it has only recently become popular in Western cultures. This much-studied extract, produced from Camellia sinensis leaves in China, is used as a source of antioxidants for the preservation of good health. It is also used as an aid to promote weight management.

Cultivated abundantly in Asia, India and China, as well as in other tropical countries, turmeric has a long history of use in Chinese and Indian medicines. The rhizome of this 3- to 5-foot-high plant is boiled, cleaned and dried before its therapeutic use. Traditionally, is has been used to treat inflammation, flatulence, jaundice, menstrual difficulties, hemorrhage and colic. Research is also under way to examine its ability as an antioxidant and its use in cardiovascular disease and gastrointestinal disorders.

View your shopping basket or browse other items.